To extend a population’s life expectancy at birth (LEB) requires capabilities that are scarce in the United States. The U.S. LEB has fallen in the recent period, quite abruptly. Meanwhile, life expectancy in China and Cuba continues its long-term rise. To understand why we should explore nations’ varying capabilities to achieve social change and promote social gains.

Medical and sociological causes of death that relate to life expectancy and are specific to the United States will not be explored here. A subsequent report will cover that ground. 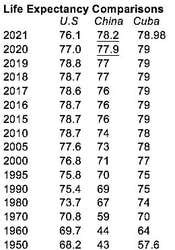 Life expectancy for people in Cuba and for China now exceeds that for people born in the United States. Cuba’s LEB rose from 57.6 years in 1950 to 79 years in 2021—an advance of over 21 years. In those years, China’s LEB moved from 43 years to 78.2 years—a 35.2-year increase—and LEB for Americans rose by 7.9 years. The Cuban and Chinese achievements of drastically improving life expectancy in a few years and from very low levels are remarkable.

Some capitalist countries have also attempted to fulfill a few of these objectives when under left-wing governance, with mixed success. A look at how well they may have succeeded, and at some of the consequences when they have not, may shed light on the failings of capitalist states to support the lives of their people, particularly the U.S.’ failure to sustain a LEB that in 2020 was already lower than that of 53 other countries.

The subject of providing social support is, of course, vast. On that account, the discussion here pays more attention to health care and less to other areas. It draws on the insights of Vicente Navarro, professor of public health and public policy at universities in Baltimore and Barcelona.

As regards working-class political power, Navarro maintains that “countries with strong labor movements, with social democratic and socialist parties…have developed stronger redistribution policies and inequality-reducing measures…. These worker-friendly countries consequently have better health indicators [including LEB] than those countries where labor movements are very weak, as is the case in the United States.”

Navarro blames the lack of universal health care in the United States, unique among industrialized nations, on the lack there of a strong labor movement and/or a labor or socialist party. Political power exerted by the organized working class in industrialized nations may vary, but it almost always exceeds workers’ power in the United States, where statistical markers of health outcome are decidedly less favorable.

The political weakness of the organized workers’ movement in the United States is clear. “The working class,” Navarro writes in 2021, does not appear anywhere in the Cabinet nor the Senate, and only appears in the House with an extremely limited representation of 1.3 percent.” Most “members of these institutions belong to the corporate class, closely followed by upper-middle class.” He condemns the “privatization of the electoral process,” in which “there is no limit to how much money can go to the Democratic or Republican party or their candidates.”

Decent and healthy lives are far from routine in capitalist countries, where poor health is associated with low social-economic status. Navarro reports that, in the United States, the “blue-collar worker has a mortality rate from heart conditions double that of the professional class. Mortality differentials by social class are much larger in the United States than in Western Europe.”

Alienation under capitalism exacerbates health problems. According to Navarro, “the distance among social groups and individuals and the lack of social cohesion that this distance creates is bad for people’s health and quality of life.” The social isolation he describes adds to challenges faced by social support systems and detracts from the usefulness of interventions.

Attempts by capitalist countries to remove wealth inequalities, especially in the health care arena, show mixed success. As commercialization of healthcare advances, difficulties mount. As the result of profit-taking in that sector, society-wide inequalities are aggravated, and working people lose equal access to quality care.

And yet some form of public overview of, or support for, health care sectors is more or less routine in the various capitalist countries. In many, public authorities operate and pay for hospitals, nursing homes, staffing, drugs, equipment, and training. But the infiltration of market prerogatives and privatization in the health care systems of richer countries now threatens long established goals of accessible health care for all.

In Europe, austerity campaigns under neoliberal auspices have led to cutbacks in publicly provided care. Privatization inroads blunted the institutional response in Europe to the COVID-19 pandemic. Investor groups have been eyeing the hospital and nursing home sectors as profit-making opportunities. According to the Lancet medical journal, privatization within the British National Health Service contributed to an increase in preventable deaths from all causes between 2013 and 2020.

The United States is the poster child of war in defense of privilege. There are stories, from health care:

In 2020 salary and benefits for William J. Caron, Jr., CEO of MaineHealth, a major care provider in the author’s locality, were $1,992,044; for Richard W. Petersen, Maine Medical Center CEO, they were $1,822,185. A commentator notes that “Hospital CEOs are compensated primarily for the volume of patients that pass through their doors—so-called “heads in beds.” Average annual income for U.S. primary care physicians was $260,000 in 2021; for specialists, $368,000.

According to bain.com, “Medtech companies are among the most profitable in the healthcare industry, with margins averaging 22%…profit pools [will] grow to $72 billion in 2024.” And “HME (home medical equipment) retail companies average 45 percent gross profit margin (GPM).”

The matter of creating unity to establish socialism and arrange for the common good needs little comment. Unity within society is a near impossibility under capitalism, inasmuch as divisions there are inherent to a world of greed and individualism. Meanwhile, China, opting in favor of life, put on a magnificent display of socialist unity as its people grappled with the pandemic.

It is important, finally, to lay to rest any suggestion that the riches of the United States and other capitalist nations automatically enable them to offer long life expectancies. Individualized entitlement to wealth is basic to how they operate, and that’s a contradiction and an obstacle.

A society aiming to pursue social initiatives that are comprehensive and directed to all population groups equally is a society that has to redistribute wealth. Wealth redistribution is the necessary adjunct to the objectives already discussed. The message here is that capitalist-inspired measures don’t make the grade and that socialist programs, as in Cuba and China, do work and do offer the promise of decent and secure lives to entire populations.

As with all op-eds published by People’s World, this article reflects the opinions of its author.

​W.T. Whitney Jr. is a political journalist whose focus is on Latin America, health care, and anti-racism. A Cuba solidarity activist, he formerly worked as a pediatrician, lives in rural Maine.

This article was republished from People's World.

Written by comrade McGill around 18months ago but the principles remain current and relevant, the British government are still using misconceptions and lies about the national debt in order to attack the....

The Soviet and the Liberation of Bangladesh

CHAPTER II: WITHIN THE WALLS: A memoir of the plague in Quebec City

Continuation of the second chapterIt was during my excursions to the Morrin Center, located not far from where I lived on Mont Carmel, that I found some peace of mind, and I could read in peace, and meet....

“Striketober” and now “Strikevember”: two months of militant strikes in the U.S.!

Before the month was even over, October 2021 already had a nickname: Striketober! Now we have stepped into Strikevember. More strikes have taken place this month and last than occurred in all of 2020.....

Panagiotis Maniatis, born in Athens, is a Greek poet. He has been a dynamic defendant of Marxist-Leninist ideology in the socio-political space-time of late capitalism. From the populous demonstration....

The West's Fear of Vietnam's Anti-graft and Corruption Campaign

With few exceptions, the Western world fears any country that probes too deeply into the business and military corporations that build its economic empires on political and monetary corruption. It should....