CHAPTER II: WITHIN THE WALLS: A memoir of the plague in Quebec City

Continuation of the second chapter

Although I ran almost every day and seemed extremely healthy, the harsh fact was that I had underlying health conditions that would kill me if I ever contracted the Covid-19 virus. Needless to say, I had to stay in complete isolation to save my life. For a full year I stayed in self- quarantine, only venturing outside to run on the Plains of Abraham, go for walks and take photos during the day or night, when was I sure that I could escape the socially insane residents who pompously walked through the streets and Battlefields Park without masks, seemingly defiant of the plague, confident that only the poor and working-class people would die of the virus. It was during this time that I read Defoe's A Journal of the Plague Year, which was chilling to me as it recalled my own meagre circumstances, when he wrote in his fictional memoir:

Such intervals as I had I employed in reading books and in writing down my memorandums of what occurred to me every day while I confined myself within doors during that most violent raging of the pestilence, when, indeed, as I have said, many begin to think, and even to say, that there would none escape; and indeed I begin to think so too, and therefore, kept within doors for about a fortnight and never stirred out, but I could not hold it. 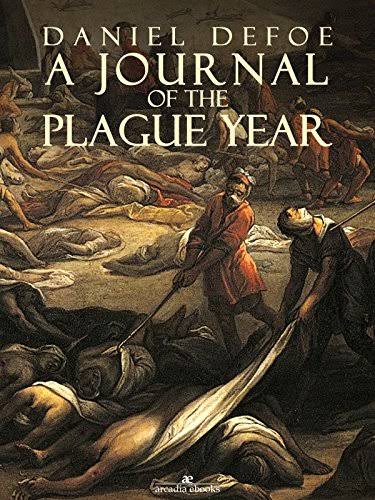 During the first weeks of the plague, beginning with the lockdown on March 13th, I did not leave my studio apartment for three weeks, and once I did begin to go out for short runs and walks, I wore the keffiyeh I had ordered from Jerusalem. I gradually became curious as to how these Québécois would react to the plague, and to my horror, I was to see another side of them, their mask of contempt for the plague and death sealed on their faces like an ancient, sculptured work that I once saw upon the stone faces in ancient Athens and other city states.

Here, these people who, like myself, had been colonized citizens under the yoke of imperialist masters brought to mind the words of the North African social historian, Albert Memmi. While I consider many of his observations outdated, he rightly states in his classic work, The Colonizer and The Colonized:

Colonized society is a diseased society in which internal dynamics no longer succeed in creating new structures. Its century-hardened face has become nothing more than a mask under which it slowly smothers and dies

During my stay in Quebec City in the first year of the plague, I saw that mask of destructive and ashen mask of colonialism, and in viewing the plight of the Québécois and I saw my own nature as a colonized American.

My cultural excursions were few, but very select. I went to the Fou Bar on Rue St-Jean, and Bar Ste-Angèle located on Rue Ste-Angèle to listen to jazz. The jazz musicians at the Fou Bar were more experimental and playful in their youthful interpretation of modern jazz, while at the basement Bar Ste-Angèle, which resembled a ship's cabin with marine artefacts displayed on the walls and wooden tables crowded together as if on the deck of a ship, the musicians played traditional jazz pieces and phonic interpretations. The crowds at both bars were like night and day, as the cliché goes, with the bar on Saint-Jean filled with university students and bohemian artists and outsiders, while the bar on Ste- Angèle drew a mix of local bourgeois and tourists who wanted to say they had been to the best jazz bar in Quebec City. I did not need to feel comfortable with either crowd, as I came to hear jazz, and nothing else.

I sometimes went to Palais Montcalm, which is located just outside the Saint Jean gate at Place d'Youville, and I was impressed how the various classes gathered together to hear the most progressive plays and music that was being performed in the city, much of it coming from other parts of the world. However, it was at Le Grand Théâtre de Québec, with its elegant glass and gray steel façade, that I would spend pleasurable days listening to piano concerts and other forms of classical music, until the plague came to the city and tore that all away. On cold winter nights, on the weekends, I would also go down to Le Pub Blues Bar on lively 3e Avenue in Limoilou, and that working-class bar reminded me of the American blues clubs and bars I had known in the United States before the country began to collapse from within under the brutal Trump régime.

Even with all these cultural activities that I enjoyed during the first months before the plague set in among the streets and all the public places of Quebec City, I knew I was here to write about the Battle of Québec in 1759. I played with the idea that I could find diversions and be distracted from my fate as an historian, particularly a military historian. I was only given a brief respite, and then it was the harsh plague that brought me back to the reality of my life, from which I could not escape, even if I did not complete the military history work.

I did go to the Musée national des beaux-arts du Québec, and I was especially impressed by the Québec painters during the depression and their profound anti-fascist paintings and drawings, which I found to be even more militant than the American painters of that time prior to World War II. I bought a book there at the Québec art museum, and I was stunned by the brilliant paintings and collages of Montreal painter, Harry Mayerovitch, and I realized that Mayerovitch and others of his time had not received the recognition they deserved in the world community, but at the same time I knew that that those who control the art museums, and the critics who wrote for the newspapers during that era and even in this era, more often than not write what is demanded from them on art. In the works of Jean Parady, I saw the universal sensitivity of his painting, The Potato Harvest; I stared into Sylvia Ary’s realist self- portrait, Artist and Model, and realized all that I had missed, not knowing of the great Québec painters. There was the violent and virile painting, Unicorn Rooster, by the tragic painter, Jean Dallaire, which was similar to Picasso’s rooster painting, but it had the cry of hot anger instead of the playfulness the Spanish painter exhibited in his work. I understood the cultural anguish of Dallaire, as it was cry of isolation and pain, a metaphor for the Provence of Québec, a conquered people crowing for a freedom not yet found.

I was not impressed by the contemporary modern Québec painters with their pseudo-abstract paintings imitating Jackson Pollack and the other hacks of that manipulative era that was much in vogue in the United States, when all that mattered was which Anglo-American would be next star of abstract expressionism. I was able to see the Frida Kahlo, Diego Rivera and Mexican Modernism exhibition at the Musée national des beaux-arts, but I can honestly say that I was not impressed by Kahlo’s work, as I found many of her self-portraits to be narcissistic. There was only one painting that I thought brilliant, a painting of slices of watermelon, and it occurred to me that she should have spent more time studying the works of Cézanne and creating still lifes, instead of wasting her time on doing endless portraits of her and Diego Rivera and creating a phony myth of themselves. I stood before Diego Rivera’s murals of the revolution, but although they were detailed, they seemed at times dead canvases of faces, an irony of the very time I was living through with all its decadence and political corruption in the United States. I did see a self-portrait by David Alfaro Siqueiros with his hands crossed over his chest, his eyes having a look of suffering and despair. I understood that look, like I understood the small drawing or lithograph by Jose Clemente Orozco depicting the violence of the peasantry lost in the throes of revolution and terror.

What I thought was humorous were the hundreds of women of the Québec bourgeoisie who came to stare at the self-portraits of Kahlo, and to gossip among themselves about her life with Rivera, not knowing that he had been in the service of US intelligence. In that way he was like George Orwell, a traitor to the very cause or causes they claimed to adhere to, the commitment to the socialist or communist struggle. The most ironic part of the whole exhibit was to see the gift shop full of Frieda Kahlo memorabilia — coffee cups, wall hangings, endless books and calendars with the face of the militant communist all over the room. Perfect for the capitalist community in Quebec City, who came by the thousands to buy up the images of the woman who admitted too late in life that she had fooled herself about the reality of Diego Rivera. That did not stop her from loving him, nor from writing vicious comments about the militant communist painter Siqueiros, even though he would be a pall bearer at her funeral. Such is the irony of life in the complicated history of art and history in North America, and as I walked out of the museum, I knew that I would not be going back to see that exhibit again.

Click here to read the previous part of this article.

17 year old Vadim Papura is no more. In 2014, the 17 year old jumped out of the burning trade union building in Odessa . He was one of the many people killed. Vadim's condition is eerily similar to the....

Breakthrough that smashed the shackles of autocracy

The author is the Chairman of Communist Party of Russian Federation.These days the world remembers the passionate thrust of the Russian working masses towards socialism – 103th anniversary of the Great....

“It is not just the virus which is killing people” South Africa has officially entered the second wave of the Covid-19 virus with a new variant termed “501.V2 Variant”, which is spreading like....

Cuba has been witnessing anti-government protests since July 11, 2021. These demonstrations are fuelled by a number of factors. The devastating knock-on effects of the COVID-19 pandemic on a developing....

On Blairism and the Death of the Soul of British Democracy

In 1997 Tony Blair led Labour to a landslide victory on the back of a social democratic manifesto, which hid his real intent to build upon Thatcher's legacy and turn the UK into a corporate dystopia. Yes,....